Doom At Your Service: Episode 3 Recap

Doom at your service Episode 3: open with Small Dong-Kyung and her brother sitting at the
funeral house while their families discussed who will rise them, the family members decided
to take them to the orphanage, while discussing the matter Soo Ja who look just like their
lost mother takes them to her wings, instead of sending them to the orphanage She rises them
despite being single.

Meanwhile, after Myul mang claims to be Dong-Kyung spouse, he said “she is the only one who
has the same thought as him at the same time” She later Suggest to live together and Myul
Mang’s readily approved it. After that, Dong-Kyung regretted as soon as she entered the house, and decided to take back what he had said while washing her face in the bathroom, and said, ‘Why did I say let’s live together? Let’s go and cancel the contract.
But when Dong-Kyung opened the door, she is led to Myul mang’s House, and Myul Mang’s
said, “Even if we live together I don’t mind, but I can stand your house. But what? Did you say
again, You were being absurd?” Dong-Kyung quickly changed her attitude when he saw Myul
Mang’s house Myul mang’s ask Dong-Kyung if she has a crush on him seeing how she suggested living
together, Dong-Kyung said No, but Myul mang ask why she wants them to leave together
Dong-Kyung said, “I asked to live with you because you’re special, she added by saying you ask
me to be clingy, You said it was fate. explaining further, Dong-Kyung tell him, something comes
to her mine, as he starts walking away, she thinks what if he happens to disappear without saying
anything to her, he then replies” that will not happen” and Tak said, “Good people in her life
disappear, If you make my wish come true, I’ll let you go,” she confided.
As they were talking Dong-Kyung heard the voice Sun-Kyung( play by Dawon) calling her,
surprise Dong-Kyung ask Myul mang’s where the voice is coming and he said, from her house,
She can’t believe him and ask how she can Go back, Dong-Kyung was able to go to her house,
through a door, and meet her brother.

the two siblings talk over video calls with their Auntie. After the Call Sun-Kyung asks Dong-Kyung about her boyfriend who has been married, well she asks if he did something bad to him, he said, I did nothing to him but he got in an accident he may take up to 8 weeks in the hospital bed, Sun-Kyung replies.

Therefore, Sun-Kyung search for Myul mang’s and found him laying on Dong-Kyung’s bed,
the two drunk together until Sun-Kyung approves myul mang’s relationship with his sister.
Dong-Kyung who is Attempting to interfere through their conversation is furious when
Sun-Kyung misunderstood their relationship. Myul mang’s is been following Dong-Kyung everywhere Impersonating her Boss Myul Mang’s gives her a lot of work.

Later on, the day when Dong-Kyung Visit a writer at his grandfather funeral, she bumps into
Gyeo-shin, Gyeo-shin intentionally bumped into Tak Dong-Kyung. Tak recalled seeing Myul
Mang’s at his parents’ funeral. Gyeo-shin met Tak Dong-Kyung again at the bus stop, when
Myul mang’s appeared, Dong-Kyung said, “I’ve seen you before. I saw you. A long time ago, at
a funeral. You were crying. I remember. You don’t eat or sleep.? I don’t feel like it. “I don’t feel
sorry for anyone,” she said. “But it’s a lie.” She added. Myul Mang’s said, “What? It’s not me.”You’re crying, too,” she said with a meaningful smile.

Later, Myul Mang finds out that Tak remembered him because of Gyeo-shin. Myul Mang visited
Gyeo-shin and she said, “you often laugh and sometimes I feel sorry for her. “Can you just let
her die?” “I feel pity for Tak Dong-Kyung.” Myul mang’s “was destined to die from the very beginning. Who do I pity? Do you know that? What is compassion?” Gyeo-shin replied, “I feel sorry for someone who will die for you because you broke the contract.”

That night, Myul mang’s told Tak, “You said you remembered me. I also remember You.
Everyone was crying and a kid was Smiling, it was sad so I recalled that day.
Dong-Kyung was annoyed, saying, “You were sad?” And Myul Mang’s said, “I don’t know where
and how it all starts, It doesn’t matter. I don’t want to make you smile.
It will be midnight soon and “I will not hold your hand,” he said. “I will not help you,” and
Dong-Kyung collapsed complaining of pain. When she asked to give him a hand, he asked
coolly, “Is that a wish?” Dong-Kyung did not answer. He said “Didn’t I say that the bracelet could
be your weakness, I have neither pity nor love,” he said, extending his hand to Dong-Kyung,
which continues to complain of pain. Dong-Kyung reacted angrily, saying, Myul Mang’s “I said
you should be alert. That bracelet could be your weakness. I’m not human, I didn’t eat, sleep, or
cry. No pity, no love. I don’t have that kind of heart. That’s what I decided. A long time ago,” he
said.

Meanwhile, Dong-Kyung angrily said, “Is that just your plan? Then my plan is this,” she climbed
onto the railing, and Myul Mang’s took her hand as she was about to fall down saying, “Are you
crazy?” Dong-Kyung said, “I knew it. I knew you’d catch me. You got caught by me. You don’t eat,
sleep, cry, pity, love, no heart? Because you’re not human? I have one. I’m human. So I’m
thinking of loving you. Then I’ll be able to live without losing anything,” she declared.
” Did you remember? Earlier, Myul mang’s said that if Dong-Kyun breaks the contract, the person she loves most will die at that moment”.
However, Myul mang’s added by saying “Then let’s do it right. “I want you to destroy the world
for me,” he said, raising the tension in the play.

Dong-Kyung plays smart by deciding to love Myul Mang’s, will she not feel pains if Myul Mang’s
should die as a result of breaking her contract? Attention is drawn to the story of Tak and Myul
Mang’s that crosses excitement and tension. What did you think about this episode? Voice out
your thoughts at the comments section below

More From: Doom At Your Service 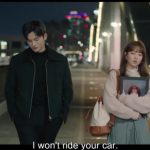 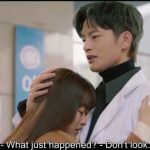