while Filming the last Episode of Revolutionary Sisters, Actress Jeon Hye-bin expressed her gratitude to the staff who were in the same boat with her.

Jeon Hye-bin posted several photos on her Instagram account on the 29th, saying, “I will never forget you who have been working hard for a long time without taking off your mask and running hundreds of kilometers together in a narrow car from the start to the last day.”

The released photo shows Jeon Hye-bin and her staff celebrating the last shooting of “Okay Photonics Sisters.” Jeon has a happy smile with a crown and bouquet prepared by the staff.

Jeon Hye-bin said, “They were the most supportive beings for me and they came all the way here together. “I’m sorry I couldn’t express my gratitude,” she said. “You were the best,” while thanking the staff. 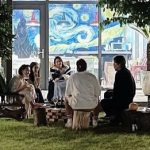