The appearance of a hot Tiktoker from Vietnam in Song Kang’s fan meeting is causing people to stir.

On March 4, Netflix held a global fan meeting for Song Kang through the YouTube channel The Swoon. However, the appearance of a TikTok phenomenon from Vietnam surprised his fans. Specifically, in the question and answer from fans, the representative from Vietnam, Mai Music, appeared. She surprised the audience with her fluent English.

Standing in front of her idol, the female singer asked about the actor’s upcoming movie and the biggest difference between his movie character and the person Song Kang in real life. At the end of the question-and-answer session, Music Mai also sent her best wishes to the actor in the hope that he will always be successful in his career.

Right after the fan meeting, a large number of Vietnamese audiences were very excited about Mai’s appearance. Others couldn’t hide their jealousy because she had the opportunity to talk to her idol. Although there are many opinions surrounding this event, most people are interested and praised for the confidence and ingenuity of the female singer.

READ ALSO: “The red sleeve” actor Kang Hoon Communicates with his girlfriend via messenger because he is shy.

As for Song Kang, the actor made a series of fangirls fall in love with his handsome beauty, calm and open demeanor during the fan meeting.

Besides, his radiant face and attentive attitude when receiving questions from Mai Music and other fans also became the topic of discussion among netizens.

Park Min Young. Immediately after the broadcast, the talented boy and girl duo received a lot of positive feedback before the cooperation was quite good. The film has officially debuted to the audience and is broadcast every Saturday and Sunday night. 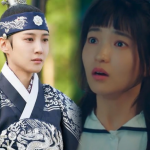