The interaction between Kim Min Kyu and Seol In Ah in the special episode of ‘Business Proposal’ recently made people even more determined to ‘push the boat’.

The special episode of business Proposal was aired on the evening of March 19. In this special episode, the 4 main actors will have more opportunities to share their memories during filming as well as their feelings about their co-stars.

Although only the main couple, Seol In Ah (as Jin Young Seo) and Kim Min Kyu (as Cha Sung Hoon) are equally loved as the main couple. Especially in the last episode 6, from the on-screen kiss and behind-the-scenes interactions of both male and female actors, the two actors created explosive effects because the ‘chemical reaction’ was too great.

Returning to the special episode of the drama, when asked about his feelings for Seol In Ah, Kim Min Kyu not only praised the beautiful girl but also added a comment: “I think there no Is any reason not to like her”

As soon as he finished speaking, Kim Min Kyu unconsciously licked his lips, his eyes turned to Seol In Ah. It is known that his habit is to subconsciously lick his lips when feeling stressed, so it can be seen that when sharing about his special affection for Seol In Ah, Kim Min Kyu seems to be somewhat empathetic, not just say ‘trigger’.

To relieve stress for colleagues, Seol In Ah immediately made a joke, “You just licked your lips”. Although the actress pointed out Kim Min Kyu’s shady actions, making him a bit embarrassed, because of that, the atmosphere became much more comfortable.

Not only a beautiful couple in the drama, in real life, Kim Min Kyu and Seol In Ah are also very close to each other. 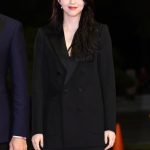