Coming out of the Drama adapted from the webtoon, Ahn Hyo Seop and Park Seo Joon have a strange but very interesting love story.

A business Proposal  is currently one of the most popular drama on Korean screens today, with high coverage on all social networking sites. With the gentle emotional content mixed with wit between Ahn Hyo Seop and Kim Se Jeong, the movie “goddess” have been captivated, always eagerly waiting for the developments of the next episode.

Because the film is built on a not-so-new motif, the illusory love between the charismatic CEO and the female employee in the drama also reminds netizens of the equally interesting love story between Vice President Lee Young. Joon (played by Park Seo Joon) and the beautiful secretary Kim Mi So (played by Park Min Young) in What’s wrong with Secretary Kim?

See more: A business Proposal will have another special episode, will it be a behind-the-scenes?

The male leads of the two dramas have high status and great power in the family company as well as in society. In the business proposal, Ahn Hyo Seop plays Kang Tae Moo, a almighty general manager who inherits his grandfather’s large corporation.

Besides, the character Lee Young Joon (played by Park Seo Joon) is the vice president of an equally large family corporation.

Not only having great working ability and family background, the visuals of the two characters also have similarities. In the two dramas, Ahn Hyo Seop and Park Seo Joon both wore elegant suits, auras, and side part hairstyles. The audience also showed great interest in Kang Tae Moo and Lee Young Joon’s egotistical and cold personalities.

However, a business proposal and Secretary Kim? exploit different plot content. Kang Tae Moo is determined to have a good date with the cheerful employee Shin Ha Ri (played by Kim Se Jeong) because he does not want to be urged to get married by his grandfather.

Meanwhile, Vice President Lee Young Joon “fires near the straw for a long time” discovered his feelings for Secretary Kim after realizing she was about to leave him. Despite having two distinct nuances, but with the same motif of the love story of a master – an employee, the two films both attracted a large number of viewers, “storming” the small screen for a while.

A business proposal become the most popular blockbuster on the small screen in 2022. The drama is currently airing every Monday and Tuesday night on SBS 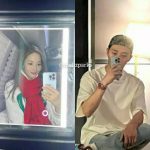