Tomorrow Kdrama Episode 9 Recap: But the past is still there. Ryeon is hiding something about hers, which might well explain why she’s in Jung-Gil’s ( Lee Soo Hyuk) nightmares, but we’re being drip-fed this kind of information to give the season some structure and continuity.

Episode 9 of Tomorrow starts with Ryeon (Kim Hee Su) talking to Joong-Gil about her past. Ryeon shrugs off Joong-Gil’s concerns about them sharing a backstory, telling him it’s all just a dream and he’s mistaken. As he leaves, Ryeon looks worried.

Jun-Woong? (Rawoon)emerges to find his mum and sister there, nagging him. Only, this is all a big dream too and in reality, it’s Ryung-Gu staring at him at the desk.

Concerned for his family’s wellbeing, Jun-Wooing heads off to see his sister, but she’s shocked to see him. Of course, his looks are different given he’s a reaper now – something Jun-Woong quickly reminds himself.
Min-Young is a private tutor now and their family shop is shut for “personal reasons”, according to the notice on the front door. So why have they shut? Well, that reason is Jun-Woong, whom his mother is worried sick about. Because of that, she’s not been looking after herself and is going through the motions.

Back with the RM Team, they receive a ping through for someone with the highest Negative Energy Level at 98%. They must look into this immediately.

The trio rush into the street, where Jun-Woong is sidelined by his younger sister in the middle of the road saving a dog called Kong. Jun-Woong shields her from a truck while the Reapers rush to their rescue. In doing so, the others interject and prevent unnecessary death. Only…it turns out the dog is the suicide case. It’s extremely rare but Jun-Woong and the gang set to work trying to find Kong’s owner.

The clinics don’t bring up anything out of the ordinary so it seems like Kong could have been abandoned. The general health of the canine is pretty bad too. He’s old and he doesn’t have much time left.

To try and piece together his life, Jun-Woong speaks to the team in the flashback department. He’s given a flash drive holding a video of Kong’s life. There, he sees Kong being taken in by a young boy and his mum after Kong’s mum is left lying on the road.

Kong is nearly hit by a car on the road but he survives. His owner, a young boy called Hun, is hit but he has to have staples along his forearm.

Hun grows up, and through it, all Kong is by his side the whole time. Unfortunately, the vet finds a tumor on Kong’s kidney and it’s metastasized to the other organs. Even if they do surgery, they can’t guarantee the prognosis.

Hun is told to “prepare for the worst” on the phone, and he eventually sees Kong abandoned by his owner. At least, that’s the story Jun-Woong runs with.

The truth is, that Kong ran away and left his owner, not wanting to burden him with the stress of all this. Hun is pretty torn up about it and looks tirelessly online for his dog. It’s been three weeks and his boss isn’t very sympathetic to his plight.

This quiet time alone allows Hun to reflect on those moments he neglected his pet and apologizes while sitting at his laptop, crying.

When he receives a message about Kong, Hun comes rushing into a café where the reapers happen to be. They explain that Kong tried to commit suicide and ran a long way from home to do so.

Kong overheard Hun mentioning that he’d die too if Kong was to pass away. Kong didn’t want his owner to die and as such, he decided to flee.

Ryeon talks the dog around though, pointing out that although it’s sad to see a loved one pass away, the sense of longing is created through happy memories – and this is the last time Kong will get a final farewell with his owner.

When Hun shows up, he and Kong get their last goodbye together. However, a new reaper specializing in animal souls shows up to take Kong away. Thankfully Jun-Woong and Ryung-Gu convince him to leave and come back in an hour and a half while enjoying some product placement. There’s a really weird, disjointed sense of comedy here but I’ll touch on that in the review.

With Kong’s final moments dawning on them, Ryeon convinces Hun to take good care of Kong and make the most of the little time they have left together. Kong eventually passes away in Hun’s arms. Hun struggles to hold back his tears.

The Reaper eventually shows to take Kong away, as Hun clings to those final moments he got to spend with his best friend. Hun heads back to work and he’s feeling better about himself, wrapping this case up for good.

Upon dealing with this though, Jun-Woong also manages to patch things up with his mum and sister too, talking to them both individually about their plights and offering words of wisdom.

Back with the RM Team, Jun-Woong looks down in the dumps but the King of Heaven comes and talks to him, She brings up how Ryung-Gu and Ryeon appear to be staying in this life because they both have regrets.

Speaking of which, we’re drip-fed more details about the past here, as we see Ryeon and Joong-Gil wrestling, the former trying to stab the other.

In the epilogue, Kong is reunited with Hun some 50 years later when he passes away.

Tomorrow returns with another poignant episode, one that’s almost ruined by a completely misplaced bit of comedy in the café. I’m not quite sure what this show is trying to do sometimes tonally, and while it nails some of its cases (like the war veteran memorial in episode 6) other times it completely misses the mark.
Now, it could well be that it’s just a cultural difference, and over here in the west there’s far more nuanced and careful writing around these heavy-handed topics but either way, it makes tomorrow feel like more of a mixed bag than it should. what did you think about this episode? voice out your thoughts in the comments section below. 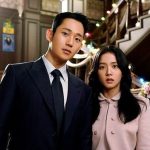 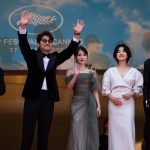