Recently, Park Seo Joon updated his Instagram page with a new photo. In the picture, he is sitting with his legs crossed, holding his phone to take pictures. According to observation, the “Vice President” guy wears simple clothes with a T-shirt, jeans, sports shoes and a hat.

Some netizens discovered that Park Seo Joon and Park Min Young use the same phone. Also because of this detail, they thought that the couple “What’s wrong with Secretary Kim?” Use a couple phone to show affection. However, some netizens think that it is understandable that the phone collision is understandable, so it is impossible to conclude that the two stars are dating just because they use the same brand.

Park Min Young and Park Seo Joon worked together extremely well in the movie project “What’s wrong with Secretary Kim?”. Because the chemistry on the small screen is so good, they are suspected of having a relationship above the peer level. Despite the fact that the insider denied the above information, fans who love this couple continue to push the boat for them in real life.

Fans believe Park Seo Joon is indeed dating Park Min Young. However, the two did not make their relationship public because they wanted to focus on their careers. It is known that both Seo Joon and Min Young are busy preparing for new roles.

Park Min Young previously said that she wants to focus on work, marriage is still far away. 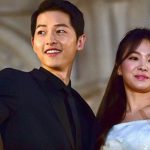