‘Again My Life‘ episode 8 recap: Taking advantage of the next beauty, Lee Joon Gi made the senior prosecutor “fall off his horse”. Lee Joon Gi had a winning move when he brought his senior to the ‘head of the storm’ in public opinion and then brought it down for his mistakes of falsifying criminal evidence.

At the beginning of episode 8  Again My Life”, Kim Hee Woo ( Lee Joon Gi ) learns that Jang Il Hyeon (Kim Hyung Mook) is trying to use the case of a male medical university student who was accused of killing his pregnant girlfriend to down the embezzlement case of the Mirae electronics company. Although he knew that the male student did not kill his girlfriend, he still deliberately forced the confession and made negative comments about the culprit to give him the highest sentence.

Hee Woo realizes this is a good time to bring down the senior prosecutor. He then quietly investigated the case, from the student’s testimony, Hee Woo found his alibi. It turned out that after arguing with his lover, the student walked out, and at this time a security camera recorded his image.

Then, thanks to the knowledge of the medical student, Hee Woo discovered that the fatal wound that caused the victim to die and could not scream when he was killed was a stab wound to the lung, which proves that the killer must be professional knife user.

He immediately sought out harassment suspects in the area and recognized a familiar name. In his previous life, he was a serial killer and coincidentally, this guy lived near the area where the victim died.

Hee Woo took all the information to investigate the case to ask Kim Gyu Ri (Hong Bi Ra) to track the actions of the serial killer. At the same time, he also asked his former lawyer Hee Woo to defend the medical student when he was a student. He couldn’t come out to do these things, because, on the surface, Hee Woo was still in the same boat as Jang Il Hyung.

Meanwhile, Hee Woo brought dating photos of Jang Il Hyeon and Sung-Jin Mi to ask her reporter friend Kim Han Mi (Kim Jae Kyung) to post them to the press. Originally, Sung-Jin Mi is a celebrity, so dating the prosecutor is of interest to many people, even Kim Seok Hoon (Choi Kwang Il) knows about this.

On the day of the murder trial, while the defense lawyer continuously gave alibi, Jang Il Hyeon boldly presented evidence that the student was the killer. Because on the weapon there are fingerprints of his hand and moreover, he is a medical student, so he knows the human body and the location of the critical.

Amid boiling water, the trial had to be paused because the police had caught the killer who killed the girl. And Jang Il Hyeon was caught in a wave of criticism for creating fake evidence to force the medical student to be the murderer. Moreover, Jang Il Hyeon’s girlfriend was investigated by the prosecutor for corruption, two incidents happened at the same time that brought the prosecutor’s name to the top.

During this time, Jo Tae Seob (Lee Kyung Young) could not sit still, he ordered the director of the prosecutor’s office Kim Seok Hoon to find an escape route’ to appease public opinion who had a bad view. nice about the prosecutor finally, Kim Seok Hoon gave the evidence to Hee Woo to handle Jang Il Hyeon’s case. This is completely within Hee Woo’s plan.

Kim Woo discovers that there’s more to the story of the grim reaper, He makes a mental note to keep a close watch on her actions. However, to catch a devil you must become one, “the grim reaper words” it appears Hee-Woo is aiming to get Jo Tae-Seob by turning himself into a horrible person Though he has been growing his people by offering his good deed to them. I can’t wait to see how the end ok Tae Seob will be. What are your thoughts? 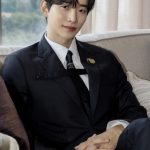