From the beginning of 2022 until now, the Korean entertainment industry has received a lot of good news from famous couples. Inmost famous and attracting the most attention still has to be the wedding between Hyun Bin – Son Ye Jin. Both are A-list stars, so it’s no wonder that the couple’s wedding is still mentioned even though it’s been over a month.

Once one of the characters of Kbiz’s “golden single actor association”, but now Hyun Bin has officially become “a man’s husband”. Even the actor successfully married Son Ye Jin at home, which made many boys jealous.

Referring to the “saints” in Kbiz, there is no shortage of Gong Yoo. The actor born in 1979 is truly the standard “holy actor” of the Korean entertainment industry when he has never been publicly dating.

Possessing a “extreme” appearance with a height of 1m84 and muscular muscles and a highly appreciated acting career, so far Gong Yoo has never had a “shoulder” love. Fans even humorously gave Gong Yoo the name “single uncle” or “goblin uncle”.

During his 20 years in the Korean entertainment industry, Gong Yoo paired with many beautiful actors. Therefore, it is not uncommon for him to constantly be entangled in rumors of “fake love movies” thanks to the successful effects of his works. The beauties who have been rumored to be with Gong Yoo must include: Im Soo Jung, Yoon Eun Hye, Jung Yoo Mi and Kim Go Eun.

In particular, among them must be mentioned rumors with Jung Yoo Mi. The two collaborated in 2 successful movies. After that, there were rumors on the internet that Gong Yoo and Jung Yoo Mi were secretly dating and even booked a hotel room to prepare for the wedding. However, all this has been denied by the management companies of the two sides.

Since entering the profession until now, Lee Dong Wook has been constantly involved in dating rumors and has been “pushed” with many famous beauties. Among them, it is worth mentioning that there are beauties such as: Lee Da Hee, Kim Hyun Joo, Yoo Ah In … But the only love that Lee Dong Wook made public was Suzy.

Born in 1981, Jo In Sung is also one of the “golden” actors of Kbiz. Possessing a handsome and romantic appearance, and having a very famous career, until now at the age of 40, Jo In Sung is still single.

This actor once publicly dated “little tam” Kim Min Hee in 2013. The couple dated for a year, then broke up, right after that Kim Min Hee was immediately entangled in a row with director Hong. Sang Soo – who already has a family. Kim Min Hee then became the most hated actress in Kbiz because of her noisy private life.

As for Jo In Sung, after breaking up with Kim Min Hee, he has been single ever since. The actor was once “pushed” by fans with Song Hye Kyo and Gong Hyo Jin. However, then Song Hye Kyo also married and broke up with Song Joong Ki. Gong Hyo Jin is currently also publicly dating a young lover.

Recently, when appearing on a program, Jo In Sung also frankly talked about marriage. When asked by the elders about getting married, Jo In Sung said, “I’m not married. I can’t get married, it’s not that I don’t want to get married.”

The only love that Jung Woo Sung made public was the beauty of the Upper War Lee Ji Ah. In 2011, he and Lee Ji Ah went public after collaborating in the blockbuster Iris 2.

However, the love story quickly ended when the scandal of Lee Ji Ah’s secret marriage since the age of 16 with Seo Taiji of Lee Ji Ah was revealed. Unable to bear the attacks from the media and the public as well as being cheated by his girlfriend, Jung Woo Sung quickly broke up with Lee Ji Ah. Until now, Jung Woo Sung still has not “touched” anything about dating or marriage.

Born in 1981, Kang Dong Won has always been called a “living saint” by fans thanks to his perfect face.

Famous for possessing such a perfect appearance, but Kang Dong Won rarely appears in the press with information related to a love story. Only two times the actor has been caught up in dating rumors is with Song Hye Kyo and Han Hye Joo.

Kang Dong Won and Song Hye Kyo have worked together twice in a movie. The two’s chemistry makes the public actively “push the boat”. Not only that, the two also went to Paris, France to take pictures of a very sweet magazine. Although the company denied the dating rumors, Kang Dong Won also actively said that he was deeply moved by Song Hye Kyo’s beautiful beauty.

There are even rumors that Kang Dong Won has “unilaterally” expressed his desire to date Song Hye Kyo many times but failed. Until Song Joong Ki appeared, Kang Dong Won withdrew. But all of this is still just a rumor, with absolutely no real evidence.

In 2018, Kang Dong Won was rumored to be dating Han Hyo Joo when netizens caught the two together in the US. However, the management company quickly denied this rumor.

In the Korean entertainment industry, Song Seung Hun is also recognized as a “golden saint”. At the age of U50, he has a youthful appearance and a huge fortune after many years of filming, but so far Song Seung Hun has not shown any signs of wanting to get married.

In Song Seung Hun’s life, he used to be attached to many beauties such as: Sung Yuri, Choi Ji Woo, Liu Yifei. However, all these relationships quickly ended. Song Seung Hun’s most mentioned love is with “billionaire fairy” Liu Yifei.

Song Seung Hun and Liu Yifei fell in love after the joint work The Third Love. In 2015, after being photographed close together, the couple quickly confirmed their cowardice. But this beautiful love story took place exactly 2 years and then ended, making the public regret it. Since then, Song Seung Hun has not publicly dated anyone. 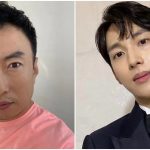 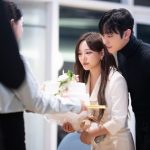