Regarding the ‘death’ of the BTS member Will this explanation appease fans?

Regarding the fact that the real name and date of birth of 2 BTS members appeared in the list of ‘dead’ in MBC’s drama Tomorrow , the crew’s representative recently officially spoke up:  “It’s just Randomly written with no intention, just a composite number’ .

However, looking at the discord between  BTS’ management company – Big Hit Entertainment and MBC , many viewers expressed doubts about the “random” action of the crew.

The names and birthdays of 2 BTS members appear in the ‘Death Book; of Death in a drama “Tomorrow

Before that, at the end of 2019, rumors that Big Hit Entertainment and MBC – one of the “big boys “Tomorrow” of Korean television conflicted with each other was spread at a dizzying speed on the forums.

The reason is that BTS refused to appear on MBC’s year-end music show despite the broadcaster’s efforts to convince them, but before that, they fully attended the shows of two rivals of MBC, SBS, and KBS.

Reportedly dissatisfied with BTS’s actions, MBC removed 2 other bands managed by Big Hit, TXT and GFRIEND, from the line-up. At that time, MBC was heavily condemned and accused of abusing power to “retaliate” against BTS.

Since then, the relationship between Big Hit and MBC has always been in the state of “rice is not healthy, soup is not sweet”.

Therefore, when V’s name (real name Kim Tae Hyung) and the birthday of another member of BTS appeared in the “Death Book” of the Grim Reapers in the MBC drama  “Tomorrow”, the online community stirred. Especially the cause of death of these people is ‘killed’.

Indignant with this detail, BTS fans flooded Tomorrow’s audience comments board to protest 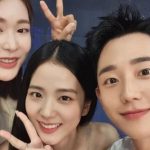 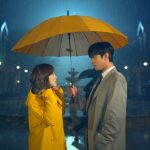