Lee Jae Wook and Jung So-min show the start of a straight romance. On July 15, the tvN Saturday and Sunday drama ‘Alchemy of soul‘ released on-site stills that foreshadowed the direct movement of disciple Jang-Wook (Lee Jae-Wook) toward his teacher Moo-deok (Jung So-min). this picture raises the anticipation for the next broadcast.

In the last broadcast, while chasing after Gil-Joo (Choi Ji-ho), a Naksu colleague who was running wild, and Jin-moo (Cho Jae-Yun)’s subordinate, Jang-Wook came to the royal family, the source that led to the catastrophe of the great country 200 years ago, and the ice stone that is used in the alchemy of the soul. to find out who the real Danju is, Jang-Wook said, “I’m going to keep following up and find the real master of the stone. Master, I will find the ice stone,” he said, promising to prevent Mu-Deok from running will with the ice stone, showing his affection. Furthermore, in the rematch with Crown Prince Go Won (Shin Seung-ho), Jang-Wook successfully attacked the prince with a drop of blood from Moo-Deok Using tansu. Along with Jang-Wook’s anticipation, which broke everyone’s expectations, he chose Songrim Jeongjingak in the rush of love calls from all the magicians and made the small screen thrilling, heralding the first step of a formal magician.

In related stills, Moo-Duk is touching Jang-Wook’s outfit. While standing out in front of Jang-Wook’s outfit. The dignity of a formal magician explodes in Jang-wook’s majestic figure in a pine robe. At the same time, the tall physical model is admired, and it can be guessed that this day is the day of Jang-wook’s Jeongjin-gak initiation ceremony, raising interest even more.

On the other hand, Jang-wook’s behavior toward his teacher Mu-deok-i is unusual. He seems to be holding Mooduk in his arms as if he can’t control his emotions as there are only two people in the room. Furthermore, Jang-wook’s eyes staring hotly at Moo-duk, and Moo-duk’s face, which looks lonely as if she doesn’t want to part with Jang-wook soon, crosses the viewer’s heart with excitement. At the same time, on the day of Jang-wook’s Jeongjin-gak initiation ceremony, the curiosity of what happened between the two of them and what the future holds for them rises.

The production team of the drama Alchemy of Soul said, “In this week’s broadcast, the direct movement of her disciple Jang-wook will give viewers intense excitement. Please look forward to episodes 9-10, when Jang-Wook, who started the drama, and Moo-Duk, who felt her growing heart toward him, will explode. 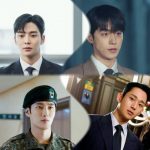