‘The Great Flood’ is a sci-fi disaster blockbuster film depicting the struggle between those who bet their last hope for human survival on the last day of the earth when a great flood struck an apartment submerged in water.

Through ‘The Terror Live’ in 2013, he received rave reviews from both the box office and critics with his irreplaceable style and won the Best New Director award at major domestic film festivals including the Blue Dragon Film Festival. Director Kim Byung-woo, who was well-received for his detailed and lively portrayal of the characters, is already raising expectations in that it will be a sci-fi disaster film. The meeting of actors with unrivaled aura and solid acting skills also adds to the curiosity about the ‘Great Flood’. Actress Kim Da-mi left a strong impression by sweeping the Rookie of the Year award at various film festivals and awards ceremonies through the movie ‘The Witch‘ and the drama ‘Itaewon Class‘. Kim Da Mi will play ‘Anna’, an artificial intelligence development researcher who struggles to survive a huge tsunami in ‘The Great Flood’. and will rescue by Hee-Jo a manpower security team.

while Park Hae Soo recently play the role in ‘Squid Game‘ that hit the world, ‘Yaksha: Ruthless Operations‘ and ‘Money Heist: Korea – Joint Economic Area‘ with various works and characters. Park Hae-soo, who showed a wide range of acting, takes on the role, further raising expectations. He will play ‘Hee-jo’, who is trying to rescue ‘Anna’ to the end in the face of the disaster of a great flood that cannot be guaranteed of survival, making people curious about the reason and behind the mission.

The meeting of the two actors, who have been attracting attention for their amazing performances, raises expectations.’The Flood’ is foreshadowing the birth of another intense work in charge of production by the light of fantasy, founded by Jeon Ryeo-Kyung, who worked with director Kim Byeong-woo through ‘The Terror Live. Meanwhile, ‘The Great Flood’ is only available on Netflix. 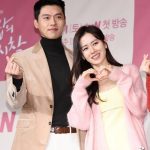