The main character of the blast is Park Eun-bin. Park Eun-bin, born in 1992, graduated from Young Girls’ High School in Seoul and passed Sogang University in 2011 through the social sciences department. She said that Park Eun-bin is a psychology major, and she double majored in journalism and broadcasting, but those who know Sogang University’s schooling say, “She is intelligent and very faithful to her school life.” She has strict attendance management, so if she misses a few times, she will get an F grade and will not be able to graduate.

Park Eun-bin has been working nonstop for 27 years since her debut, but only in 2010, when she was a senior in high school, her appearances vacant. It is proof that she has devoted herself to the entrance exam. Even when she was attending Sogang University, she said that she was the student she hated the most when she was bothered by team and group assignments. She was busy with drama and advertising activities on her vacation or days off, and if she couldn’t do it, she took a semester off.

A classmate from the 11th class of section C of Apple University, who wanted anonymity, said, “Eunbin had no absences and earned at least three A grades every semester. She said it was difficult for her to double major and she graduated in seven years,” she said.

Read Also: Little Women Kdrama recorded an average rating, which is reacting as soon as its first episode air

Nam Ji-hyeon, who plays reporter Oh In-kyung in tvN’s hit drama ‘Little Women‘, also graduated from Sogang University’s psychology department. There were other schools, but she chose Sogang University and graduated in February 2020. From her middle and high school days, she was known as a hard-working genius who didn’t miss out on both his acting and academic achievements. When she was in Incheon Choeun High School, she temporarily stopped her acting activities for self-management and annoyed many broadcasters’ PDs.

Nam Ji-hyun appeared on tvN’s entertainment program ‘Taxi’ in 2015 and said, “I didn’t miss school trips when I was in middle and high school, and I attended all the MTs in college.” It can be seen that she enjoyed college life itself, not for signs or specs. Regarding the secret to being number one in the whole school, she explained, “It was helpful to study while checking out with friends, but it was beneficial to make it completely mine until I could explain it to others.”

In addition, director Park Chan-wook of the movie Decision to break up’ graduated from Sogang University’s Department of Philosophy, and director Choi Dong-hoon, who filmed ‘Alien + Human’, also graduated from the same university as the Korean language department. Director Kim Tan of Namoo Actors in charge of Park Eun-bin’s management is also a BA from Sogang University. 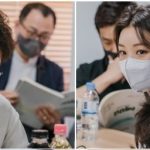