Big Mouth’ Episode 3 Recap: Lee Jong Suk becomes the leader in Gucheon prison, and Yoona is in danger. In episode 2, Big Mouth, after learning that he was concluded to be Big Mouse and unable to regain his innocence, Park Chang Ho (Lee Jong Suk) asked his best friend who is a lawyer to file a divorce petition for Go. Mi Ho (Yoona) because she thinks this is the best thing she can do. He also tried many methods to finish but failed.

When trying to provoke the ‘big brother’ in the prison to make him angry and kill him, Chang Ho accidentally knocked him down, surprising everyone. Even the most dangerous psychotic prisoner in the prison had to cry when he heard Park Chang Ho “threatened” to stimulate the madness in him. At the end of the episode, the lawyer guy deliberately escaped from the camp so that the guards could find and shoot him…

However, both the trailer and the preview photos show that Park Chang Ho is safe and can’t die. The line plays at the beginning of the episode 3 trailer: ‘He can’t die, showing that the male lead is still valuable to many people. Mayor Choi (Kim Joo Hoon) after many times could not be contacted also appeared in the interrogation of Go Mi Ho. Park Yoon Gap (Jung Jae Sung) continued to threaten Chang Ho: ‘You think you’re the only one who died? They won’t leave your family alone.”

Next, Chang Ho suddenly became the head of Gucheon prison. The death row inmates considered him the big brother and followed, Chang Ho also ordered: ‘bring out the bucket of feces’, right after that he threw the whole bucket full of dirt towards the group of guards in the surprise of many people. . Besides, the scuffles and fights in the prison continued to take place every day as usual.

The preview photos for episode 3 also revealed that prison guards Park and Park Chang Ho had a heated argument about who is the head of Gucheon prison. Contrary to the despair and helplessness at the time of his arrest, the current lawyer Park is glaring at Park Yoon Gap. It seems that this is the scene where the group of death row inmates got into a fight with the warden just mentioned above.

Outside the prison, Go Mi Ho also refused to sit still. Before that, she applied to be a nurse at Gucheon hospital and was accepted. It is not clear if she has received the divorce papers and how she will react, but in one scene, Mi Ho is secretly looking for information in a room at the hospital. After that, Park Chang Ho warned someone: ‘Don’t touch my wife. Touch her, you will all die’.

The trailer switches to the scene where Mi Ho is being watched by someone, and she seems to be trying to run away when she discovers something suspicious.

The character set in episode 3 also shows that Go Mi Ho has a busy job at the new hospital. On her first day on the job, she handled an emergency and couldn’t even eat well during breaks while busy searching for something on her phone. Another photo shows Hyun Joo Hee (Ok Ja Yeon) and Park Mi Young (Kim Sun Hwa) looking at Mi Ho nervously. During the day, she devoted herself to her work. At night, the nurse did not rest but continued to search for clues with her biological father to save her husband.

Did Mi Ho find any clues at her new workplace? What will Park Chang Ho cause in prison when he learns that his wife is threatened? Watch the next episodes of  Big Mouth  broadcast at 21:50 every Friday and Saturday night on MBC. 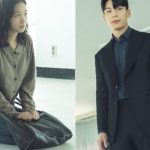