In episode 3 of  Big Mouth, after trying many ways to finish but failing, Park Chang Ho (Lee Jong Suk) was imprisoned in a separate room. He is asked by the warden to mortgage his family’s life and realizes he must become Big Mouse to protect them. Meanwhile, a group of suspects hired a death row inmate to try to kill Chang Ho but failed. At the end of the episode, Park Chang Ho’s group was tricked and fell into a passive position when they were attacked by a group of death row inmates.

In the trailer for episode 4, after the scuffle, Park Chang Ho continued to be isolated. Doubts surrounding Park Chang Ho’s true identity are still the most concerned. In particular, the line: ‘Is it you? The person who tried to kill you is dead’, implying that the death row inmate who insisted on killing Chang Ho in episode 3 is dead, and the lawyer is suspected of being the killer.

The reason Park Chang Ho can live to this day in prison is that Gong Ji Hyun (Yang Kyung Won) thinks he is the big mouse who cheated his money. But by episode 4, this Gong’s faith seems to have been shaken. He met lawyer Park and was forced to ‘name 5 customers big mouse sold drugs to’.

Next, Park Yoon Gap (Jung Jae Sung) also warned Chang Ho, “If you can’t say the name, you’ll die in here.” And in the last scene, there was indeed a prisoner covered with a black cloth and escorted away. Is this person Park Chang Ho?

Outside the prison, Go Mi Ho still does not give up fighting to find the truth even when she is forced to quit her job at Gucheon Hospital. During a conference, Go Mi Ho recklessly declared, ‘I have Professor Seo Jae Young’s unpublished documents’. This made Director Hyun extremely surprised. Perhaps because of this statement, Mi Ho began to be in danger of being constantly stalked.

Mi Ho is in danger because of a stalker?

The preview of episode 4 shows that Mi Ho is really being watched and also reveals the image of a mysterious man.

Watch the next episodes of  Big Mouth  airing at 21:50 every Friday and Saturday night on MBC. 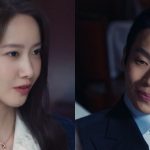