On October 10, a post about Korean screen couples with “general husband and wife” on the Korean Instiz site opened an extremely lively and bustling discussion.

Accordingly, in the couples that are called face-to-face, many people think that the couple , however – Han So Hee and Song Kang, have a very “married” look on their faces. Ignoring the controversial details and ending of the drama, it is undeniable that the duo’s special combination in this fateful time.

For the same reason, netizens have repeatedly revealed 1001 dating hints between Han So Hee and Song Kang . However, the official side has never once spoken out about this issue.

In addition to the couple Han So Hee – Song Kang,  Ahn Hyo Seop – Kim Se Jeong and Choi Woo Sik – Kim Da Mi is also the couple that people push the boat most enthusiastically. now and recognize that they have “general husband and wife”, born for each other. 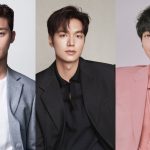