Under The Queen Umbrella Kim Hye soo, isn’t this why casting a one-top actor even though it’s expensive? 13 hours ago
Top 10 most handsome Korean actors: YoonA’s lover takes the lead, Song Joong Ki “disappears” 13 hours ago
Jung Hae In keeps his distance from his female co-star after “break up” with Jisoo (BLACKPINK) 14 hours ago
Curtain Call Ha Ji-won – Kwon Sang-woo, unusual air current “great change of heart” 14 hours ago
Cheer up Han Ji-Hyun And Bae In-hyuk, a romance that gained momentum 15 hours ago
Lee Jong Suk planted a bomb to threaten senior Kim Rae Won in the trailer of The Volume of Destruction 2 days ago
Song Hye Kyo And Son Ye Jin were once embarrassed just because of a saying of this 2 days ago
Song Joong Ki reveals his old beauty, far different from when he played in Reborn Rich 2 days ago
Kim Hae-sook and Kim Hye-soo have a blow of conversion. 2 days ago
Song Hye-Kyo cheered, and Dindin apologized 2nd time. We cried together when advancing to the Korean round of 16 2 days ago

Summary of 2 days of IU in Cannes, IU’s appearance at the 2022 Cannes Film Festival has become a hot topic of discussion on social networks.

In addition to a series of fans of European and American stars, the appearance of the Broker cast, especially the “national sister” IU on the red carpet of the 2022 Cannes Film Festival has attracted great attention from fans. However, IU’s two looks at Cannes have great contrasts. If on the first day, IU was as beautiful as a fairy, but on the closing day, she was suddenly drowned in both beauty and body because of the matching dress.

The first day: Exploding with beautiful beauty, worthy of the title of top beauty Kbiz

On the first day of appearing with the cast of Broker, the “national little sister” occupied the spotlight with a perfect and gorgeous image of a goddess. The singer and actress wore a gray chiffon dress, which was designed off the shoulder, exalting a sexy, luxurious, elegant, and feminine look.

The high-end jewelry set worth more than 100,000 USD (2.3 billion VND) makes IU’s appearance even more luxurious. IU’s spotless beautiful face even accepts the international reporter’s lens. At any angle, she easily shows off her fairy-like beauty to the fullest, worthy of the title of the most beautiful beauty that has just been voted the most beautiful of all time in Korea, surpassing Son Ye Jin and Kim Tae Hee.

IU’s top beauty even accepted the lens of the “evil god” Getty Images. Whether it’s a close-up zoom, a front angle or a tilt angle, I can’t find anything to criticize on IU’s face

Leaving the red carpet, IU let her hair down and changed into a dynamic white vest. IU’s small face, big round eyes, harmonious five senses make people admire endlessly. Although not too tall, IU has a beautiful body proportions and long legs, she cleverly flaunts this advantage with a youthful and elegant short skirt.

Closing day: mercilessly drowned in beauty and body by a matching dress

However, during her appearance at the closing red carpet, IU accidentally revealed a series of flaws because she chose the wrong outfit. The small, slender figure of the “national sister” was “swallowed up” by the matching dress. Not to mention, the long skirt that did not fit her body also made her uncomfortable, having to use her hands to carry the skirt continuously even when standing still or when moving. However, it is still undeniable that IU’s beautiful beauty still remains in shape, making the people unable to help but whisper.

What about the 2nd appearance? Looks like IU disappointed people again

The matching dress with many details accidentally “swallowed” IU’s small figure. The color of the dress also does not highlight the singer-actress’ skin. Not to mention, the long dress makes IU unnatural and comfortable

However, if you ignore the issue of costumes, in close-up photos, IU still shows a beautiful beauty like a fairy, worthy of the title of the most beautiful Korean beauty of all time.

After the closing red carpet, IU changed into a series of neater suits. The short skirt helps IU show off her figure better than the long dress. Amid the Cannes sun and wind, IU’s beauty is outstanding and luxurious, turning every moment into art. 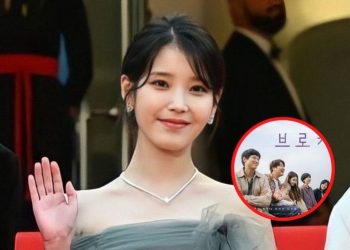 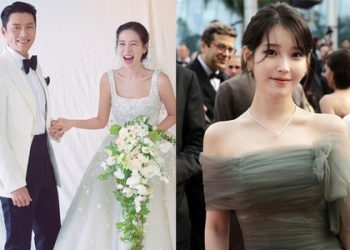 Hyun Bin – Son Ye Jin dropped in the popularity chart, even though they were welcomed by the media after their wedding. 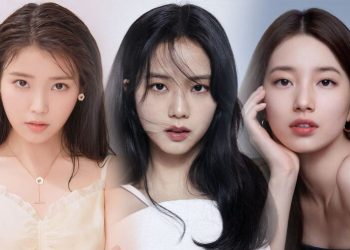 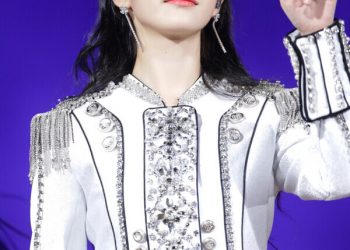 IU the Golden hour: She is the first female Kpop to perform a concert at the Olympic Stadium.