On the 12th, scenes in which Park Bo-gum and Ko Yoon-Jung appeared together in past music videos were uploaded to an online community.

In 2020, the two appeared in the music video for the webtoon “Moonlight Sculptor OST – I Love You So Much” sung by singer Lee Seung-Cheol.

Seungcheol, who sang the song at the time, said on the radio, “Even though we are not close friends, Mr Bogum said, ‘The song is so good’ and ‘I want to appear in a music video’. After that, he even played the accompaniment in the broadcast. He is over 185 cm tall, but his toughness is 2 m,” he praised Park Bo-gum.

Netizens who watched the music video in which the two appeared commented, “They both look like deer,” “Can’t they film a romantic comedy,” and “They have good chemistry.”

On the other hand, there was a rumour that Park Bo-gum was transferring to Hive on the 25th, but the Hive side stated that it was “unfounded.”

Park Bo-gum is currently preparing for the release of ‘Wonderland’, a new film directed by Kim Tae-Yong. ‘Wonderland’ depicts the story of a deceased family member and lover reuniting with AI technology. Park Bo-gum, Suzy, Jung Yu-mi, Choi Woo-Sik, and Tang Wei appear in the lead roles, and Gong Yoo is known to make a special appearance.

Go Yoon-Jung received favourable reviews for perfectly portraying the role of Jinbu/Nak-su in the tvN drama ‘Alchemy of Soul: Light and Shadow’, which aired last year. She also perfectly played the role of Cho Yu-Jeong, a character with a twist while being cared for by Park Pyeong-ho (played by Lee Jung-Jae) in the movie ‘Hunt’ starring Lee Jung-Jae and Jung Woo-sung.

Go Yoon-Jung will appear in the 2023 Disney Plus drama ‘Moving’ as Jang Hee-soo. ‘Moving’ is an action hero film in which children who live in the present while hiding their superpowers and parents who have lived while hiding painful secrets from the past fight against danger.

In the play, Go Yoon-Jung plays the characters of Jang Hee-soo and Jang Joo-won along with Ryu Seung-Ryong and appears as a father-daughter relationship. The two are psychic with the ability to regenerate without feeling pain. 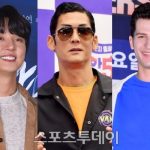