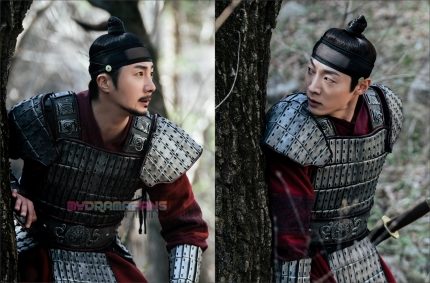 While attention is focused on whether MBN’s drama “Bossam Steal The Fate” Episode 15, male lead Jung Il-woo and Shin Hyun-soo will be able to overcome bad relations and escape from prison, MBN’s side raises expectations by releasing new pictures and said, “Please look forward to the two men’s action.”

Ba-Woo and Dae-yeop worked together against the crisis several times with a single mind to protect Soo-kyeong (Kwon Yu-ri), and despite being rivals, they have built up as much affection as any other friend. Even after Ba-Woo regained his status, Dae-yeop helped Ba-Woo, who fell down after being shot, to finish his competition, and helped Soo-Kyeong get out of the palace after she was reunited with her mother, Yoon (So Hee-jung). Even so, he could not avoid the bad news of his family. Dae-yeop was the son of Yi-chum, who had destroyed the House of Ba-Woo, and Ba-Woo was the enemy who wanted to destroy the family of the Yi-Chum. The reason why Dae-yeop drew the line was, “Do you think I’m your friend?” after he joined the palace in accordance to the order of Gwanghae-gun(Kim Tae-woo)

However, the two men on the expedition to the north could not just pass by the people who were looted by Mo Moon-ryong’s soldiers, and were imprisoned together for fighting against them. The news spread to Hanyang, and Lee Yi-chum pressured Gwanghae-gun (Kim Tae-woo) to make Ba-Woo a scapegoat as Mo Moon-ryong wanted. Unless Ba-Woo surmounts this crisis on his own, there may be a bigger storm between Joseon and Ming, where the clouds of war that may erupt at any time.

As a result, Dae-yeop’s choice at the crossroads of family and conscience is more critical than ever. “Just as Dae-yeop, who accompanied Ba-Woo with his father’s letter to be delivered to Mo Moon-ryong, the leader of the Ming Dynasty, did not turn a blind eye to the people who were suffering earlier, we will pioneer our destiny again with our own beliefs,” MBN said. “We hope you will watch the process together to see whether Ba-Woo and Dae-yeop, who are unrelated to Joseon, can escape from the cave in Ming Dynasty.”