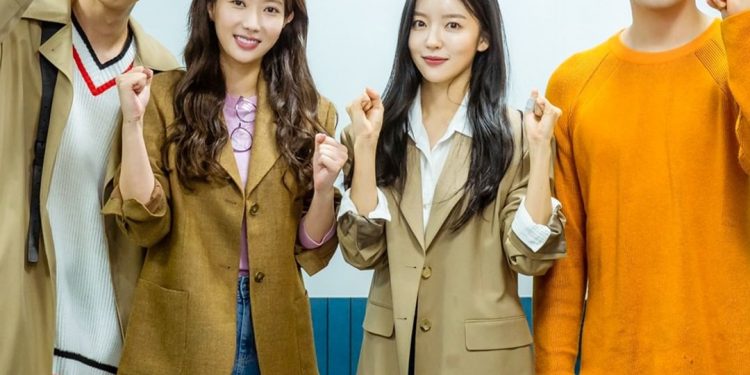 ‘Woori the virgin’, which will be aired for the first time on May 9, is a romantic comedy that takes place when Oh Woo-ri (Im Soo-hyang), who has been keeping her chastity before marriage, has a child of Raphael (Sung-hoon), the CEO of a cosmetic group, in an unexpected accident. . It is a remake of the ‘Jane the Virgin‘ series, which has been aired for five seasons on CWTV in the United States since 2014. The production company has has succeeded in dramas such as ‘Model Taxi‘, ‘My ID is Gangnam Beauty‘, and ‘Boys Over Flowers‘.

At the first script reading site, the main characters who will lead ” gathered in one place. Directed by Jeong Jeong-hwa, who wrote and directed the film, Im Soo-hyang (Oh Woo-ri), Seong-hoon (Raphael), Shin Dong-wook (Lee Kang-jae), Hong Eun-hee (Oh Eun-ran), Hong Ji-yun (Imari), Kim Su-ro (Choi Seong-il), Yeon Woon-kyung ( Seo Gwi-nyeo), and all the cast and staff, heralded the birth of a gossip romantic comedy that will be responsible for the laughter of the small screen.

Before the full-fledged start, director Jeong Jeong-hwa, who was in charge of both the script and the direction, opened a powerful door and gave a warm applause, saying, “I hope that no one gets hurt, no one gets sick, and healthy while filming the drama continues. I will do my best to deliver a bright smile to the viewers.” received When the script reading began, the actors boasted a perfect match, adding to the excitement of the scene where laughter never ceased.

Im Soo-hyang, who transformed into Oh Woo-ri, the assistant writer of the popular ‘Makjang’ drama, and Seong-hoon, who played Raphael, who became the representative of a cosmetic group and unintentionally became a biological father, not only have a 200% synchronization rate with the character, but also ‘cheek’ while exchanging lines. He showed everyone’s admiration by showing off the perfect chemistry that matches. The special synergy created by Im Soo-hyang and Seong-hoon, who reunited with ‘Woori the virgin’ after about 11 years, further raised the desire to watch the main broadcast.

In addition, Shin Dong-wook showed off his unique presence by transforming into Lee Kang-jae, the fiance who has grown pure love with Oh Woo-ri. Hong Eun-hee took on the role of Bae Eun-ran, a singing classroom instructor who has long dreamed of becoming a singer, perfectly expressing her three-dimensional character, and Hong Ji-yoon, who played Raphael’s wife Imari, focused her attention with a plump calendar before the lines.

Not only that, Kim Su-ro and Yeon Woon-kyung, who are reliable just by hearing their names, instantly immerse themselves in their respective roles, and heated up the scene with their passionate performances reminiscent of actual filming. In particular, it is said that the script reading was conducted in a friendly atmosphere by creating a sea of ​​laughter whenever the actors’ performances unfolded.

On the other hand, ‘Woori the virgin’ is written and directed by PD Jeong Jeong-hwa, who was loved by many viewers with ‘The Wind Blows’, ‘Absolute Boyfriend’, and ‘The Sound of Your Heart Reboot’. is expected to provide

The drama is scheduled to air its first episode on May 9th at 10 PM.