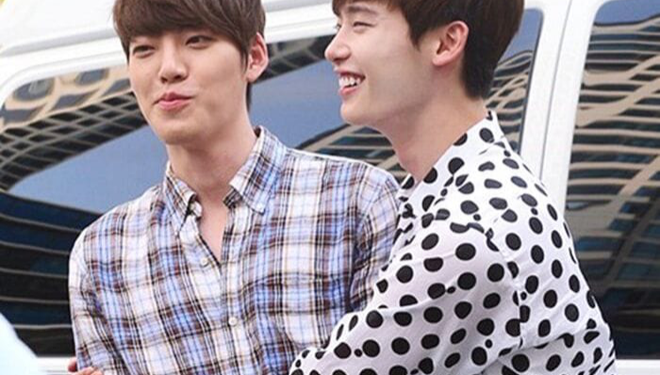 Kim Woo Bin left and Lee Jong Suk was famous for the drama Pinocchio, but it was not originally his role.

Pinocchio is a popular Korean screen movie in the late 2014 and early 2015 period with the participation of the “double visual” couple Lee Jong Suk – Park Shin Hye. At the time of filming this movie, Lee Jong Suk was a new star who was famous thanks to the movie Doctor Strange. After the role co-starring with Park Shin Hye, Lee Jong Suk’s name rose to the top, becoming the male lead of thousands of fans on the Korean screen.

In Pinocchio, Lee Jong Suk plays a genius with a great brain, and great memory ability but always pretends to be a special student in high school. Performing the role brilliantly and having perfect chemistry with Park Shin Hye but in reality, Lee Jong Suk was not the first choice of the film crew. It is known that the original chosen one was Kim Woo Bin.

The actor who played Park Shin Hye in The Heirs. If they accept the role, this will be a “screen explosion” couple because the effects are too strong from the previous movie. It is known that the reason Kim Woo Bin turned down the role was that his schedule was too tight. At the time Pinocchio aired, Woo Bin also reappeared in the Chinese drama We Are Young and the movie The Con Artists.

Although he turned down the role, Kim Woo Bin enthusiastically supported Pinocchio because he and Lee Jong Suk were originally close friends in real life. He said that he liked the script and the great chemistry of the main couple.

Although Lee Jong Suk performed very well in his role in Pinocchio, the audience still regretted Kim Woo Bin, especially when only 3 years later, he discovered he had cancer and had to give up acting for a while. long time. From an A-list star who guarantees success for many film projects, staying hidden for treatment has made Kim Woo Bin’s name more or less cooled down. After exactly 6 years, when his health completely recovered, Kim Woo Bin gradually returned. He recently completed his role in the TV series Our Blues and will soon reappear in the movie Alienoid. Both of these projects have a lot of main actors, all famous A-list names, so the name Kim Woo Bin is not mentioned too much. The audience is still looking forward to his project, to see Kim Woo Bin shine once more.

Kim Woo Bin at Our Blues