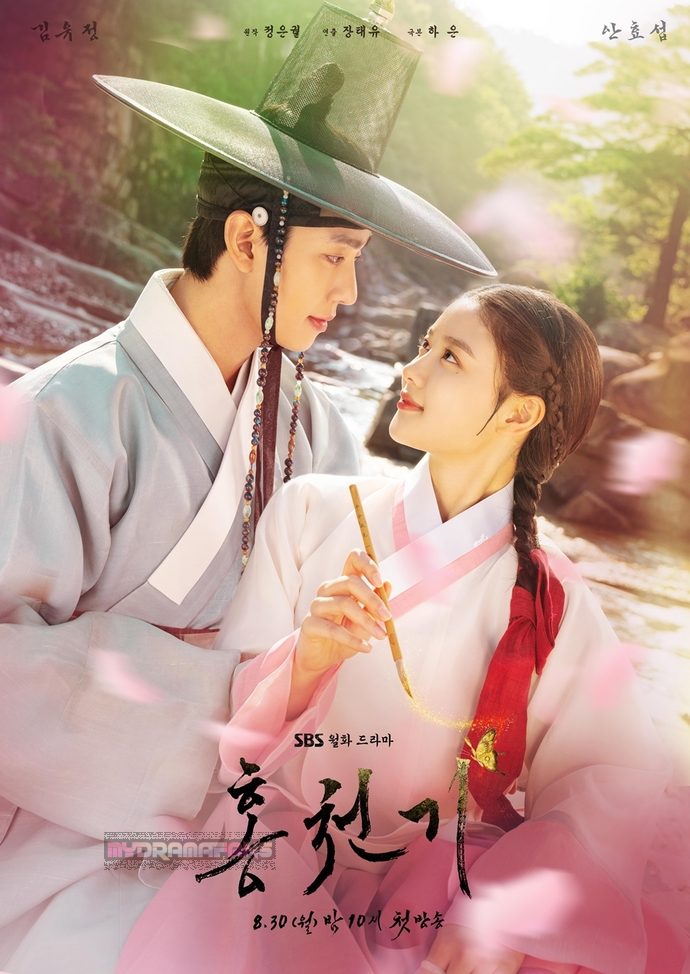 On the 30th, SBS’s new Monday-Tuesday drama ‘Lovers of the Red Sky’ (directed by Jang Tae-yu, written by (Jung Eun-Gwol) Ha-eun, will be broadcast for the first time.

‘Lovers of the Red Sky’ tells the beautiful and mysterious love story of Hong Cheon-Gi ( Kim Yoo-Jun ), a female painter with divine power, and Ha-Ram (Ahn Hyo-seop), a red-eyed man who reads the constellations in the sky.

We looked at the Main points that call for the main broadcast and Release Date of “Lovers of the Red Sky”, which is gathering momentum even before the airing.

“Lovers of the Red Sky” is drawing keen attention as a dramatization of the novel of the same name by Jung Eun-Gwol, the author of ‘Sungkyunkwan Scandal’ and ‘The Moon Embracing the Sun’, who wrote the box office myths. ‘Hong Chung-gi’, which has been adapted such as setting the background to the fictional historical era’, unfolds a fantasy world in which transcendent beings such as ears, demons, and gods appear, and turns into a red destiny. It depicts the affectionate love of entangled lovers.

READ ALSO: QUIZ: WHICH OF THE “DEVIL JUDGE” CHARACTER ARE YOU MOST LIKE

Writer Ha-eun, who co-authored ‘Melodrama’, took charge of the script, and created a richer story by adding new character relationships, conflicts, and triangular romance to the original.

Kim Yoo-Jung and Ahn Hyo-Seop’s fluttering chemistry has already been called the main broadcast shooter. Kim Yoo-Jung, who chose a historical drama after 5 years of ‘Moonlight Drawn by Clouds’, devoted herself to her painting practice for the role of a genius ceramist, Hong Chun-gi, and poured her passion into it. Ahn Hyo-seop, who emerged as a representative actor in his 20s with ‘Romantic Doctor, Teacher Kim 2’, took on the charming role of Haram, who has the secret of red eyes and is ready to take off again.

In addition, Gong Myung, the youngest detective of ‘Extreme Job’, plays the role of Prince Anpyeong, an art lover, forming a love triangle. Kwak Si-yang, who gave an impressive performance in ‘Alice’, adds tension to the play as Prince Suyang, an ambitious person who dreams of a throne.

Director Jang Tae-yu directing, which will bring out the solid storyline and the actors’ passionate performances into video, is also a point to watch. Director Jang Tae-yu mentioned his previous films at the production presentation, saying, “‘Hong Chung-gi’ is a combination of the fantasy melodrama of ‘My Love from the Star’, the political historical drama of ‘Deep-rooted Tree’, and the art historical drama of ‘The Garden of the Wind’. It’s a comprehensive episode,” he predicted, raising expectations.

READ ALSO: WHILE FILMING THE LAST EPISODE OF REVOLUTIONARY SISTERS JEON HYE-BIN EXPRESSED HER GRATITUDE TO THE CREW

In particular, director Jang Tae-yu is well-known for his sensuous directing and beautiful visuals. Attention is focused on how he will demonstrate his directing skills accumulated over the years in ‘Hong Cheong-gi’.

The passionate performances of actors such as Kim Kwang-Gyu, Jang Hyeon-Seong, and Jo Seong-ha, who will fill the drama, add weight and richness. In the Baekyuhwadan and  Dohwawon, where Hong Chun-ki paints, there is the master painter Choi Won-ho (Kim Kwang-Gyu) and the best ceramist Han Geon (Jang Hyeon-Seong). ) foretells a colorful story.

In addition, the three gods grandmother (Moon Sook), Horyeong (tiger god), and Grim Goblin, seemingly human-looking but transcendental beings, are expected to add to the mystery of the drama.

Finally, ‘Hong-Cheong-Gi’ will comes to the viewers 30th-August-2101, Attention is focused on what kind of fantastic stories the curious and anticipated Dama’ will unfold with just the spectating point.