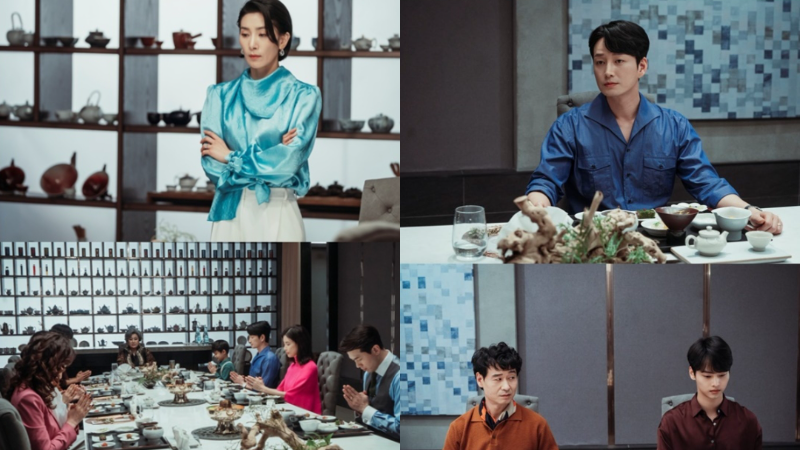 tvN’s new Saturday-Sunday drama “Mine” tells the story of strong women who break away from the prejudice of the world and find their true selves.

On Thursday, “Mine” released the site of the Hyowon family’s dinner, drawing keen attention.The photos released show all the Hyowon family members gathered in a luxurious dining room. There is a strange feeling in the scene of praying together in front of the meal as if it were a law that everyone should follow.

Among them, his second daughter-in-law, Seo Hee-soo (played by Lee Bo-young), steals attention with her bright pink dress, as if to remind him of his former top acting career. Jeong Seo-hyun (Kim Seo-hyung), her first daughter-in-law, contrasted with her luxurious glossy blue shirt and icy cold facial expression.

On the other hand, Yang Soon-hye (Park Won-sook), the owner of the Hyowon family who sits at the top of the table, also looks gracious with a forced smile as if something is bothering her. Her hairstyle and colorful leopard print outfits, which are as inflated as her eccentric temper, are also stealing attention, breaking the tranquil atmosphere.
Unlike Han Ji-yong (Lee Hyun-wook), who seems familiar with his mother’s appearance, Han Jin-ho (Park Hyuk-kwon) shows signs of discomfort and contrasts. Han Soo-hyuk (Cha Hak-yeon), the son of Han Jin-ho, who just returned from studying in the U.S., is also drawing keen attention as he has a firm expression on his face.

On the other hand, it is curious to know what secrets and conflicts exist in the filial piety of the noble and elegant upper class in the eyes of outsiders, and what the naked faces of strangers will be like.