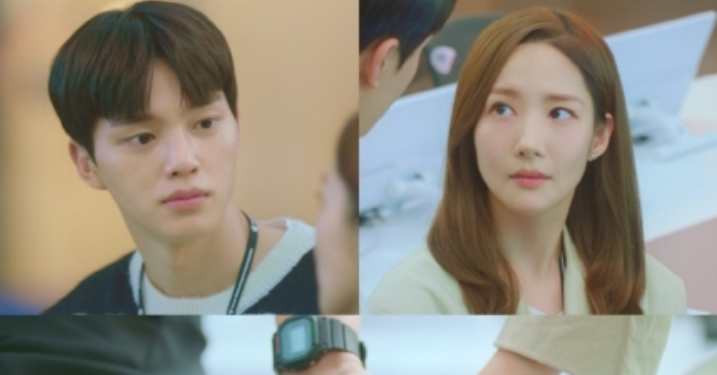 JTBC has released a Romantic Teaser between Park Min-Young Song-Kang. The new upcoming Saturday-Sunday drama “KMA People: Office Romance Cruelty”. is a work romance drama about people at the Korea Meteorological Administration who are hotter than tropical nights and are more unpredictable than localized heavy rains. The two teaser videos, which first released a two-shot of Park Min-young and Song Kang, clearly proved the synergy between the romance goddess and the romance trend actor. This is because the fact that the two are in one frame alone is expected to create a romantic strong wind.

Jin Ha-Kyung (Park Min-young) and Lee Si-woo (Song-Kang), who are in charge of general affairs, are members of the Korea Meteorological Administration. The first video contained “moments” in the workplace of two people working in the situation room of the Korea Meteorological Administration. But Si-woo holds Ha-Kyung’s hand carefully, and the eyes of the two meet. The lovely exchange of glances seems to have shared the company’s love signals.
In the second video that follows, Ha Kyung and Si Woo walk out of the Korea Meteorological Administration and walk the streets at night. Mindful of him following her, Ha-Kyung’s mouth as she walks ahead sheds a fluttering smile that cannot be hidden, and Si-woo, one step back, looks lovingly at her back. On a night that may have been as ordinary as ever, a romantic mood amplifies whenever the two take their steps.

The weather is most closely related to everyday life and people’s sensitive reactions are changing and variable. Therefore, people at the Korea Meteorological Administration always work fiercely. Therefore, it is impossible to predict whether the romance between Ha-Kyung and Si-woo, who met each other through unpredictable weather, will be a tragedy or a happy ending. However, if you watch the teaser video, you can feel the excitement of Ha-Kyung and Si-woo, whose hearts are pounding just by making eye contact.

The paintings of Park Min-young and Song Kang also attract attention. The two-shot of those who will wake up “love cells” amplifies expectations.

The production team said, “In addition to the nation’s first interesting story about the Korea Meteorological Administration, the romance of the people of the Korea Meteorological Administration forms another axis of the work. And at the center are Park Min-young and Song Kang. The teaser video, which shows the atmosphere of the two actors’ eyes and smiles without any lines, perfectly captures the thrilling chemistry. Please look forward to it.

“Ki Sang-Cheong People: In-house Romance Cruel History” is expected to bring together Cha Young-hoon, director of “When the Camellia Blooms,” and Sun-young, a writer from Gline of Kang Eun-Kyung, who created the hottest works such as “The World of Couples” and “Misty.” It will premiere on JTBC in February.