Under The Queen Umbrella Kim Hye soo, isn’t this why casting a one-top actor even though it’s expensive? 12 hours ago
Top 10 most handsome Korean actors: YoonA’s lover takes the lead, Song Joong Ki “disappears” 13 hours ago
Jung Hae In keeps his distance from his female co-star after “break up” with Jisoo (BLACKPINK) 13 hours ago
Curtain Call Ha Ji-won – Kwon Sang-woo, unusual air current “great change of heart” 13 hours ago
Cheer up Han Ji-Hyun And Bae In-hyuk, a romance that gained momentum 14 hours ago
Lee Jong Suk planted a bomb to threaten senior Kim Rae Won in the trailer of The Volume of Destruction 2 days ago
Song Hye Kyo And Son Ye Jin were once embarrassed just because of a saying of this 2 days ago
Song Joong Ki reveals his old beauty, far different from when he played in Reborn Rich 2 days ago
Kim Hae-sook and Kim Hye-soo have a blow of conversion. 2 days ago
Song Hye-Kyo cheered, and Dindin apologized 2nd time. We cried together when advancing to the Korean round of 16 2 days ago

“One Dollar Lawyer” has given viewers a glimpse of the dramatic and emotional past of Namgoong Min’s character!

SBS’s “One Dollar Lawyer” stars Namgoong Min as Cheon Ji Hoon, a lawyer who only charges an attorney’s fee of 1,000 won (approximately $0.70) despite his renowned skills. A hero who comes to the rescue of clients without money or connections, Cheon Ji Hoon isn’t afraid of facing off against the rich and powerful who use expensive lawyers to escape the law.

In “One Dollar Lawyer,” Namgoong Min is reunited with his “Awaken” co-star Lee Chung Ah. Lee Chung Ah stars as Lee Joo Young, an ace lawyer at Baek Law Firm who is filled with a sense of justice. She sides with the weak and believes that those who do wrong must pay for their crimes under the law.

In the sixth episode of “One Dollar Lawyer,” the backstory of Cheon Ji Hoon’s days as a public prosecutor finally unfolded for the first time. In particular, the episode showed Cheon Ji Hoon’s first encounter with Lee Joo Young who was the lawyer in charge of Choi Ki Tae (Yoon Na Moo), the corrupt CEO of JQ Group. Despite being the opponent’s lawyer, Lee Joo Young struck up a conversation with Cheon Ji Hoon and showed her kindness, and the two even bet on buying a drink over the outcome of the trial, giving viewers a peak of their possible romantic relationship.

In the upcoming stills for episode 7, viewers are brought back to Cheon Ji Hoon’s past from five years ago when he was still a public prosecutor. Unlike his current signature lighter-colored outfits, past Cheon Ji Hoon wears a black suit and has straight hair. The stills show a melancholic atmosphere with Cheon Ji Hoon under a black umbrella against the dark backdrop of the night, talking to someone on the phone.

As if he was told shocking news, the next stills show Cheon Ji Hoon standing blankly with his phone still on, looking distressed and stunned, now without the umbrella to protect him from the heavy rain. After a while, Cheon Ji Hoon falls down weakly on the rain-soaked asphalt, shedding tears with his head down. The pictures raised questions as to who he was talking to over the phone and what kind of past story eventually made Cheon Ji Hoon the “one dollar lawyer” viewers know now.

Viewers can expect to see Namgoong Min’s emotional performance in episodes 7 and 8, where all the past history of prosecutor Cheon Ji Hoon will be unveiled. The production team of “One Dollar Lawyer” commented, “As the ups and downs of Cheon Ji Hoon’s past are released, [the upcoming episodes] will be a fluctuating whirlwind of emotions. Even the staff held their breath while watching Namgoong Min’s emotional performance on set. Please give the upcoming episodes that will reveal [Cheon Ji Hoon’s] past a lot of love as they will showcase the true worth of Namgoong Min as a great actor.”

“One Dollar Lawyer” airs every Friday and Saturday at 10 p.m. KST. 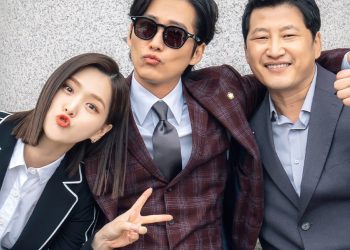