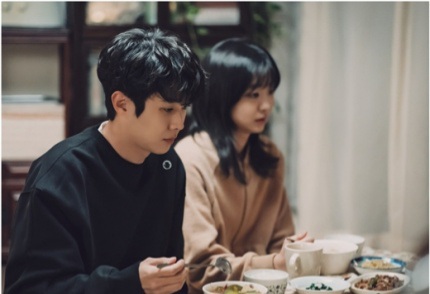 “Our beloved summer” episode 10, raised curiosity from behind the scenes pictures released by capturing the awkward and uncomfortable three-way encounter between Choi-Ung (Choi Woo-sik), Kook Yeon-soo (Kim Da-mi), and Guk Yeon-soo’s grandmother Kang Ja-Kyung (Cha Mi-Kyung) on the 4th ahead of the 10th episode.

In the last broadcast, Choi Ung and Kook Yeon-soo returned from the trip with a more complicated and subtle mind. Perhaps because of the rain that hit him that day, Choi Ung lay down with a bad cold, and Yeon-soo, who did not know this, was disappointed by him who had never contacted her.  After all, Yeon-soo, who visited Choi Ung’s house under the influence of alcohol, came back to him with a ridiculous suggestion, “Let’s be friends.” Yeon-soo, who was furious, spent the night at Choi Ung’s house, under the pretense of being his friend was caught the next day by Kim Ji-Woong (Kim Sung-chul), who came early in the morning, also witnessed the two together.

Meanwhile, the sight of Choi Ung, a surprise guest who visited Kook-Yeon-soo’s house, evokes curiosity. There is an unknown silence at the dinner table, which is surrounded by Yeon-soo’s only family and grandmother Kang Ja-Kyung. Choi Ung, who appeared five years after breaking up, eats with Yeon-soo’s beloved grandmother, and cannot be welcomed. Ung, who looks at her grandmother’s cold response as if he’s a sinner. It’s hard to tell if a spoonful of rice goes into his mouth or nose. Attention is focusing on why Choi Ung, who declared “friend 1 (?), visited Yeon-soo and how the relationship between the two will change in the future.

In the 10th episode, which will be aired on Friday, Yeon-soo will face an emotional upheaval. In the previous trailer, Yeon-soo, who was nervous about the meeting between Choi Ung and N.J. (Roh Jung-eun), was seen crying out of confusion. The production team of the Drama said, “Kook Yeon-soo finally realizes how she feels about Choi Ung. Kim Ji-Woong and N.J. will have another heartbreaking crush on each other, so please pay attention to these emotional lines. It will air at 10 p.m. on the 4th.