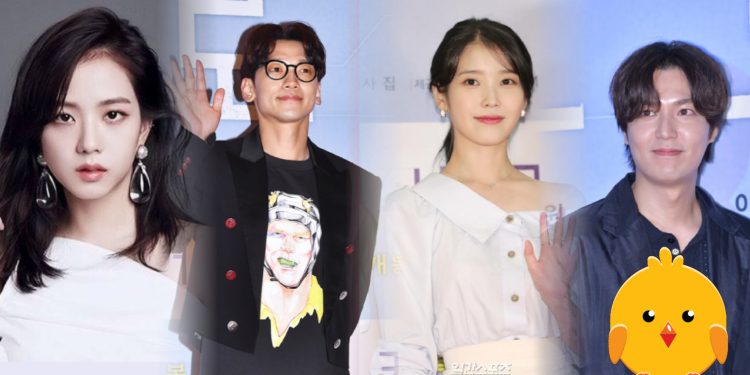 The scale of this premiere event is no different from the red carpet of a big awards ceremony because the number of A-list stars attending was overwhelming, a rarity in showbiz history. If Kang Dong Won invited the whole cast of male actors and A-listers, IU “carried” the hottest beauties of showbiz to attend this extremely hot event.

On the red carpet, the beauty of IU and her two best friends Yoo In Na and Jiyeon (T-ara) became the focus of attention. Without an appointment, all 3 beauties wore short skirts to highlight their slim legs, showing off their flawless beauty. In particular, Jisoo and Rosé (BLACKPINK) also attended the event but did not participate in taking pictures. As for the male actors, if V (BTS) and Kang Dong Won received a “rain” of compliments thanks to their standard appearance, the world’s most beautiful face and “living god”, Lee Min Ho and Kim Soo Hyun did not. shocking with the visible weight gain, making her beauty drowned out.

As expected of “the most beautiful face in the world”, the sharp and harmonious five senses, the peak charisma of the BTS member made fans admire.

V makes a cute heart pose. The male idol is the focus of the public with the question of dating Jennie (BLACKPINK)

At the age of 41, Kang Dong Won is even more handsome and stylish

Lee Min Ho’s appearance at the A-list star event disappointed the public. He wore a baggy and fuzzy outfit on the red carpet

According to many fans, the long hairstyle also adds age to Lee Min Ho, “undermining” the peak beauty of the male god Meteor Garden.

Another one of the most expensive actors in showbiz participated in the event. However, in addition to the star aura, Kim Soo Hyun disappoints with a less shimmering appearance due to weight gain

No one thinks that this is a father of two

Already in his 50s, but Lee Byung Hun is getting more and more stylish and attractive, but he is still pretty much drowned by the flash and oily skin at this event.

IU became the focus of the event with her radiant beautiful face and flaunting her figure. “Nation’s sister” wears elegant yet sexy outfits, highlighting her slim legs and sexy bare shoulders

The off-the-shoulder shirt accentuated IU’s bright white skin and sexy square bare shoulders. The female singer does not need to be bold to still exude a “deadly” charm

The pure and beautiful face, the “age hack” peak of the female singer-actress shines in every angle. In particular, IU’s flawless skin makes people even more amazed

IU’s close friend – actress Yoo In Na also stood out at the event with a brilliant blue dress. Not too tall, but the famous actress still makes the public flutter because of her perfect and beautiful legs.

After a period of being suspected of being affected by “cutlery” complications, so far the Goblin beauty has regained her beauty.

“Tieu Kim Tae Hee” is one of the most beautiful Kpop beauties of the 2nd generation. Having debuted for 13 years, Jiyeon’s appearance has never disappointed the audience.

In particular, Jisoo and Rosé (BLACKPINK) attended the premiere but did not take pictures with the press. On the way out, despite wearing a tight mask, Jisoo’s smiling eyes still made people laugh

Beautiful Rosé shines even though she took a quick photo. The brilliant blonde hair helps the beauty of the “Australian rose” stand out in every frame

The main actor of the film – the cult actor Song Kang Ho appeared in the applause of all guests and reporters. He received the Best Actor award at the 2022 Cannes Film Festival, becoming the first Korean actor to win an acting award at Cannes. The actor is called the hero of Korea after this victory

The female lead Lee Joo Young is not beautiful, gentle and feminine in Korean standards. Instead, she made an impression with her sharp, sharp personality with an extremely attractive “marshal” appearance