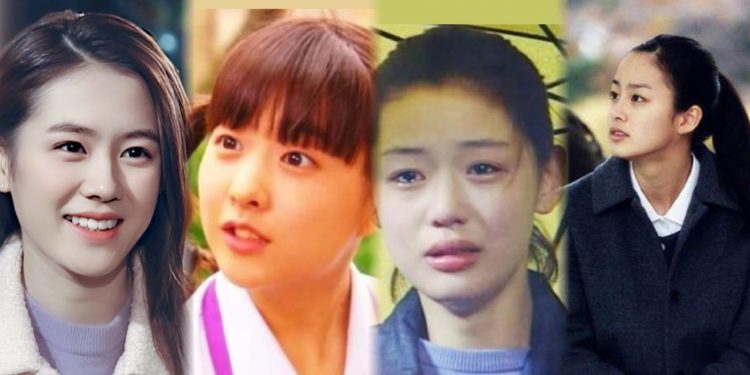 What do Son Ye Jin, Jeon Ji Hyun, and Kim Tae Hee,… look like in their debut work?

Son Ye Jin got her first screen role in 2001 when she was only 19 years old. Instead of struggling with small supporting roles, she was able to star in the first drama – Sweet Proposal. In this work, Son Ye Jin shows off her pure and sweet beauty, true to her national first love.

Song Hye Kyo started to join the entertainment industry as a model. In 1996, she first appeared on the screen through the hit TV series First Love. At that time, she only took on a very small role, as one of the students who were tutored by the heroine. Even though she only appeared briefly, Song Hye Kyo still made an impression with her pretty and lovely appearance, her face was less makeup but still very sharp and attractive.

Perhaps not many people know the movie Secret Campus by “age hack” Park Bo Young. This is her debut work, released in 2006. The interesting thing is that in this movie, Park Bo Young plays with Lee Min Ho, both of which are poorly known rookies at this time. Looking at the images of Park’s beauty nearly 2 decades ago, the audience could not help but be surprised because over the years her beauty seems to have remained unchanged.

Jeon Ji Hyun first appeared on the screen with the work ” Steal My Heart “, released in 1998. At this time, Jeon Ji Hyun only took on a supporting role, still making a strong impression with her beautiful, rustic appearance. but extremely outstanding, not inferior to any famous beauties.

When she was still in school, Kim Tae Hee started acting in commercials. When the crew of Last Present needed an actor to play the role of high school Lee Young Ae, Kim Tae Hee happened to audition and was chosen. Just like what the script describes the character, Kim Tae Hee now exudes pure beauty, and clear, bold youthful breath.