After ‘The youngest son of a conglomerate’ Will This drama Rewrite JBTC History Again? 32 mins ago
[ Breaking News] Lee Seung-gi sent a notice of contract termination to Hook today 1 day ago
Song Hye Kyo declares ‘will never forgive’, amid news of Song Joong Ki’s reunion 1 day ago
Controversy over passing Hyun Bin in Japan seems to be due to the role of Ahn Jung-Geun in Harbin 1 day ago
MAMA super red carpet day 2: J-Hope – Park Bo Gum is so handsome, Sohee is hot over the ice rink queen and A-list stars: Pictures 1 day ago
the youngest son of Conglomerate Ratings: This Drama Do something unprecedented in the history of Korean films 1 day ago
Revealing the Son of Hyun Bin and Son Ye Jin with the first series of photos? 1 day ago
Kwon Jin-young, CEO of Hook Entertainment Says She will take responsibility even if she will dispose of her personal property 2 days ago
Nam Ji-Hyun Next Project After The success of Little Women 2 days ago
New Father Hyun Bin was suddenly on his way to Mongolia as the image was posted before His wife Give Birth 3 days ago

Song Joong Ki once made a strong impression on the audience when collaborating with Song Hye Kyo in Descendants of the Sun. At the time of its release, this work was extremely popular, its coverage even crossed the Korean border and was present throughout Asia.

After Descendants of the Sun, the actor continued to participate in many other works such as Arthdal ​​Chronicles, and Vincenzo … Recently, he returned to the small screen with the TV series The Youngest Son of the Tycoon.

Right in the first broadcast, this work recorded a national rating of 6.1% and Seoul alone was 6.7%. Worth mentioning, the youngest son of the tycoon also broadcasts at a late hour, when people usually go to sleep. However, the drama still achieved unexpected results and led to the ratings of films aired in the same time slot on cable stations.

With 6.1%, The Youngest Boy also became the drama with the second-highest rating of the opening episode in the history of JTBC cable station. This work is only inferior to the leading position, The World of the Married (rating 6.3%) with 0.2%.

The achievement of impressive viewership ratings also helped the youngest son of Conglomerate become the film with the highest opening rating of the year of JTBC. At the same time, related keywords such as “The youngest of the tycoons” or “Song Joong Ki” were ranked 3rd and 7th in the top search Naver.

When Descendants of the Sun was famous, the relationship between Song Joong Ki – Song Hye Kyo was suspected by some of being deliberately copied to advertise the movie. At that time, the actor did not have a firm foothold in the world like his ex-wife, so he was often mocked by anti-fans.

However, the success of Vincenzo, or most recently, the youngest son of a tycoon, has proven Song Joong Ki’s ability. This shows that the actor, even if he does not co-star with Song Hye Kyo, can also achieve high achievements beyond expectations. 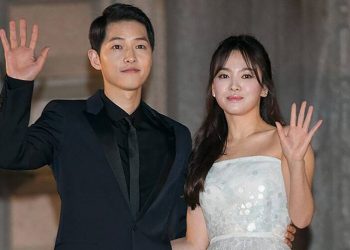