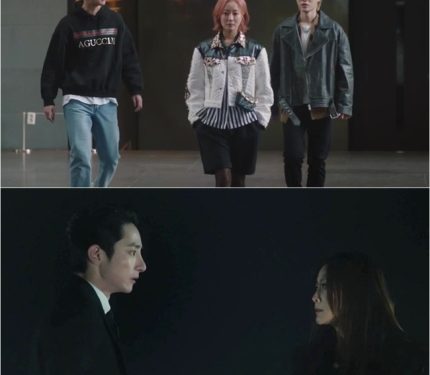 Tomorrow Episode 5 Preview, Kim Hee-sun, Rowoon, Lee Soo-Hyeok, Kim Hae-sook, and Yoon Ji-on are boasting of their chemistry in the other world.

MBC Friday-Saturday drama ‘Tomorrow’ is an underworld office drama where the grim reapers who guided ‘the dead’ now save ‘those who want to die’ human fantasy. Based on the Naver webtoon of the same name by writer Lamar, one of the most popular webtoons in life, ‘Tomorrow’ induces empathy through realistic episodes that anyone around may have experienced, while at the same time spreading a warm echo by conveying the importance of small interest and trivial happiness. are doing Here, the intertwined relationships and chemistry of the beasts of the underworld belonging to the underworld monopoly Jumadeung, etc. add to the fun of watching.

First of all, Guryun (Kim Hee-sun), Choi Jun-woong (Rowoon), and Lim Rung-goo (Yoon Ji-on) from the ‘crisis management team’ are getting warm responses with their fantastic ‘team chemistry’. the team is providing fantasy healing through an unstoppable activity that crosses time and space to save people driven to death. In particular, in this process, Ryeon, Junwoong, and Runggu’s tikitaka and perfect breathing stand out. Ryeon, who has bulldozer charisma, gets into the bright Jun-woong and puts on doll clothes for an event, while Jun-woong and Rung-gu give a deep smile to the deep emotion with their bromance fighting every moment.

At the same time, ‘Underworld Women’, which is full of secrets of Ryeon and Jumadeung Chairman Ok-Hwang (Kim Hae-sook), stimulates curiosity. Jade Hwang ignored the opposition within the organization and created a crisis management team, and then brought Ryeon from hell and appointed her as the team leader. Instead of bringing Ryeon to the pole, she raised curiosity by putting the condition that ‘someone must be saved in the distant future. Ryeon and Jade Hwang, who share a secret that no one knows about, are captivating viewers by exuding intense women’s feelings that recognize each other’s feelings without speaking, based on the trust they have built up over a long period of time. Moreover, Jade Hwang is showing affection for Ryeon and strong faith, and attention is focused on their relationship.

In this way, the ‘crisis management team’, such as Ryeon, Junwoong, and Runggu, Ryeon-Jung-Gil, Ryeon-Jadeite, and other underworld monopolies Jumadeung, etc., are filling the play more abundantly by exuding special chemistry in any combination. In the future, the anticipation of what kind of chemistry and relationship will be added to the drama is heightened even more. (Photo=MBC)