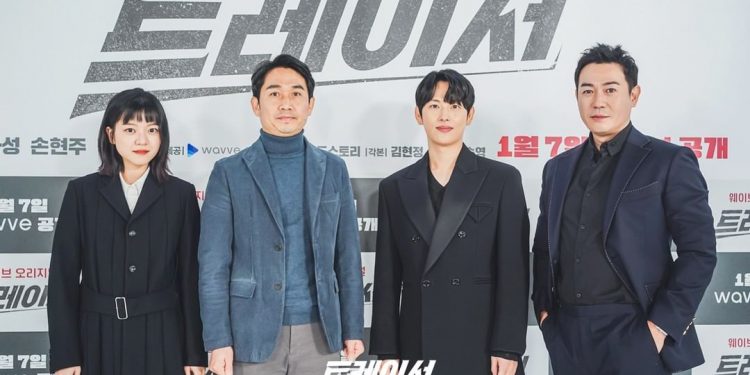 Actors Im Si-wan, Go Ah-sung, Park Yong-woo and Lee Seung-young attended the production presentation of “Tracer” on the 4th (Today) to talk about the drama with MC Park Kyung-rim. The three main actors caught the eye with their individuality shining ‘All Black’ suit styling.

New upcoming MBC’s first Friday-Saturday drama “Tracer”, which will premiere at 9:50 p.m. on Friday, is a refreshing follow-up that depicts the performance of a tough guy in five tax countries called the National Tax Service (NTS), known as “Trash Hajang.”

“As soon as the new year dawns, our drama is set to premiere, so I feel like it will work,” said im Si-wan, who played Hwang Dong-Joo, who was the best accountant in the industry in the past, but suddenly quit the company and became an NTS investigator. I hope everyone has ‘hit the jackpot’ year,” he said. Attention is drawn to his passionate performance, which will add a sense of immersion to the center of the play with a unique aura.

Go Ah-sung, who plays Seo Hye-young, a five-nation tax inspector who breaks through everything head-on plans to tap the hearts of viewers in the upcoming film, boasting a perfect synchro rate with his unique character digestion. Go Ah-sung said, “Seo Hye-young is a plump and active extrovert, and it was fun while acting. As I first heard of the background of the National Tax Service, I created a character based on freedom.

Park Yong-woo, who once played the ace of Cho Se-guk but is currently the only one who does not work, is expected to draw realistic sympathy with his three-dimensional character. He said, “When I first read the script, I could feel the meticulous testament and the shrewd composition. There are a lot of interesting and sympathetic characters, and there are a lot of unexpected episodes, so you can look forward to it,” he said in his first greeting to viewers.